Different Types of Cement and their uses on Construction Site 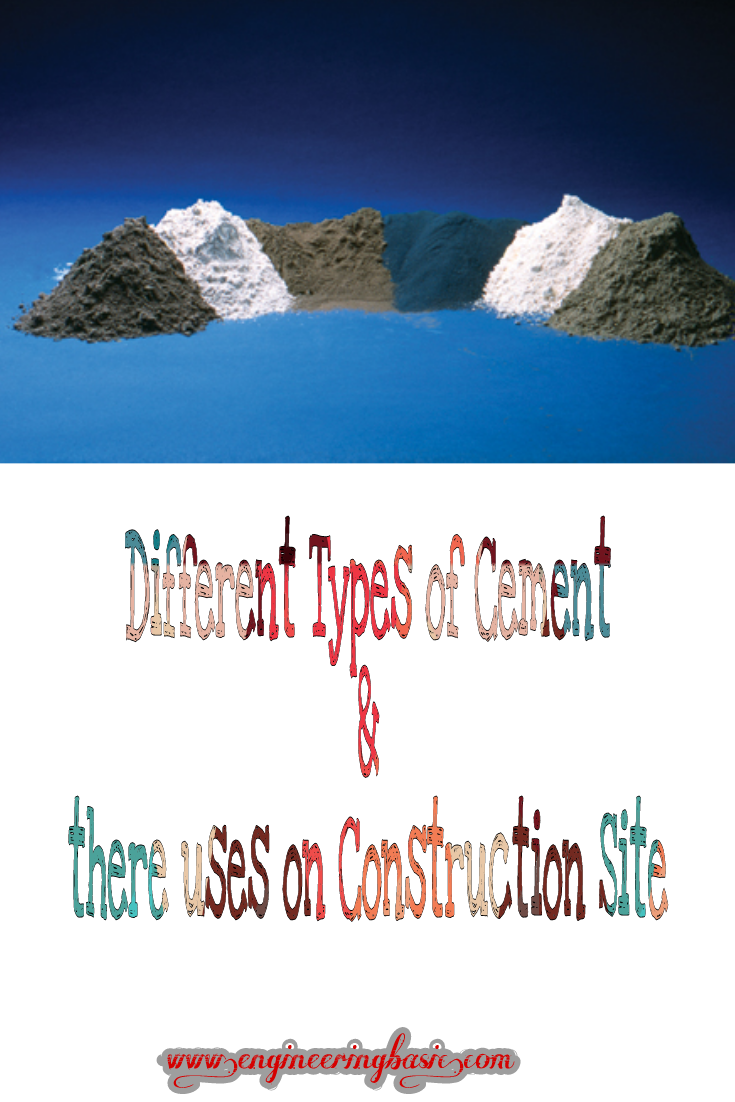 Cement is one of the most important material on construction site. Cement is use for most of the major work on site from sub-structure stage to finishing stage.

Below are the list of different types of cement and there uses.

This is consists of acid resistance aggregates such as quartz, quartzite’s, etc, additive such as sodium fluro silicate (Na 2 SiO 6 ) and aqueous solution of sodium silicate. This is used for acid- resistant and heat resistant coating of installations of chemical Industry. By adding 0.5 percent of unseed oil or 2 percent of ceresil, its resistance to water is increased and known as acid water resistant cement obtained from blast furnace in the manufacture of pig iron and it contains basic elements of cement, namely alumina, lime and silica. The properties of this cement are more or less the same as those of ordinary cement and prove to be economical as the slag, which is waste product, is used in its manufacture.

Cement of desired colour may be obtained by intimately mixing mineral pigments with ordinary cement. The amount of colouring may vary from 5 to 10 percent and strength of cement if it is exceeds 10 percent. Chromium oxide gives brown, red or yellow for different proportions. Coloured cements are used for finishing of floors, external surfaces, artificial marble, windows.

The Pigment is mixed in a finest powdered state. The amount of pigment used depends upon the shade of the desired color.

It is, however, generally less than 10 percent (by weight). The following pigments are used to obtain colored cement.

(i) Chromium oxide is used for green color.

This type of cement is extensively used for top coat in flooring and for decorative purposes in various places in a building.

For this cement slag as obtained from blast furnace in the manufacture of pig iron and it contains basic elements of cement, namely alumina, lime and silica. The properties of this cement are more or less the same as those of ordinary cement and prove to be economical as the slag, which is waste product, is used in its manufacture.

It is a modified type of Portland cement which contains 25-65 percent (by weight) of blast furnace slag. It is manufactured by grinding clinker and specific amounts of blast furnace slag together. A small percent of gypsum is also added for controlling its setting time.

The slag cement offers a number of advantages, which are following.

(i) They possess better workability, cohesiveness, and plasticity. These qualities are explained to be due to lesser specific gravity and greater specific surface area of slag cement.

(ii) They have better resistance to sulfates of alkali metals, alumina, and iron.

(iii) It produces low heat. This property makes it useful for use in mega projects like Dams.

(iv) It is economical as compared to ordinary cement.

It is better suited for use in marine structures as in docks, harbors and jetties.  It is also used in road construction in marshy and alkaline soils.

This type of cement is produced by adding an expanding medium like sulpho – aluminate and a stabilizing agent to ordinary cement. Hence this cement expands where as other cement shrinks. Expanding cement is used for the construction of water retaining structures and also for repairing the damaged concrete surfaces.

This cement is produced by grinding clinkers formed by calcining bauxite and lime. The total content should not be less than 32 percent and the ratio by weight of alumina to lime should be between 0.85 and 1.30.

High Alumina cement is manufactured by calcining a well-proportioned mixture of Limestone and Bauxite (Al2O3, n H2O). No other raw material is added, not even gypsum is mixed with the clinker during grinding.

The most important properties of high alumina cement are summarized below:

(i) It is resistant to the corrosive action of acids and salts of seawater.

(iv) It evolves great heat during setting. Due to this, it is not suitable for use in mega projects like Dams. But at the same time, it gives an advantage to high alumina cement for use in frost forming areas.

(v) They react quickly with lime therefore, it must not come in contact with lime.

Unfortunately, it is more costly. Therefore it is used only in those situations where resistant against corrosion is required. It is commonly used in construction work near and along sea-shore.

It is a special type of cement containing admixtures which reduce the affinity of cement grains for water.

Such cement types are used especially in cold, frost-forming conditions. Admixtures of naphtha a soap and acidol are generally added to achieve this property.

This type of cement contains admixtures, which decreases the wetting ability of cement grains. The usual hydrophobic admixtures are acidol napthene soap, oxidized petrolatum etc when hydrophobic cement is used, the fire pores in concrete are uniformly distributed and thus the frost resistance and the water resistance of such concrete are considerably increased.

Watch the video below to better understand the Types of Cement.

It is that type in which very low amount of heat or hydration is liberated during setting and hardening. Mostly it is used in massive concrete structures like Dams etc.

(i) The proportion of di-calcium silicate (C2S) is almost double than ordinary cement.

(ii) The proportion of tetra calcium alumino-ferrite (C4AlFe) is also increased to one and one-half time.

(iii) The proportion of tricalcium silicate (C3S) and tri-calcium aluminate (C3Al) are reduced by about 50 percent. This is because these compounds are known to liberate a very high amount of heat during hydration.

Most important qualities of low heat cement are summarized as follows:

Fineness: The residue in the Sieve Test shall not exceed than 10 percent.

Strength: It should develop a compressive strength not less than:

It is mostly used in mega projects construction like DAMS. If we use ordinary Portland cement instead of low heat cement in such structures, Cracks will develop in such structures due to the great amount of heat liberated during setting and hardening.

And a DAM with cracks is a useless structure. But when low heat cement is used, this danger (development of cracks) can be eliminated.

In this cement type, clinker and pozzolanic material such as (volcanic ash, fly ash etc) are mixed in a definite proportion with Portland cement.

The pozzolanic materials do not have any cementing qualities when used alone, but when mixed with Portland cement, they react with cement components and form compounds with cementing properties.

The pozzolana cement has many properties similar to ordinary Portland cement. But it also offers some additional properties, which are given below.

(i) It produces less heat. Due to this property, it can be used in mega projects.

(ii) It offers greater resistance to sulfates and corrosive actions of sea water.

These qualities make it more useful for construction near or along the coast and also in sulfate soil. It can also be used in sewage works and for underwater construction.

This cement is prepared by adding a small percentage aluminum sulphate which reduce the percentage of gypsum or retarded for setting action and accelerating the setting action of cement. As this cement hardness less than 30 minutes, mixing and placing operations should be completed. This cement is used to lay concrete under static water or running water.

These Types of Cement are quite different than rapid hardening cement.

Its quality is that it set into a stone-like mass within a period of fewer than 30 minutes. This property, of setting as quickly as possible is achieved by following controls in the manufacturing process:

(i) The quantity of retarding agents like gypsum is reduced to bare minimum.

(ii) The quantity of alumina-rich compound is reduced.

(iii) The clinker is ground to extreme fineness.

Quick setting cement is used only in very specific situations such as while constructing piers for bridges and other structures in running or standing water.

This cement has same initial and final setting times as that of ordinary cement. But it attains high strength in early days due to:

It is also known as High-Early-Strength cement. It is manufactured with such adjustments in the proportion of raw materials so that the cement produced attains maximum strength with-in 24-72 hours.

(i) It contains relatively more tri-calcium silicate. This is done by adding a greater proportion of limestone in the raw materials compared to that required for Ordinary Cement.

(ii) It is more fine-grained ( Air permeability 3250 cm2/gm ) than the ordinary cement. This factors helps in quicker and complete hydration of cement particles during setting and helps in gaining early strength.

However, the setting time and ultimate strength of Rapid Hardening Cement are same as of Ordinary Cement.

It is a special purpose cement. It is used in that types of projects, where quick hardening is required.

In advanced countries, an Ultra-high early strength cement is produced by separating the finest fraction ( above 700 m2/kg ) from the rapid hardening cement at the manufacturing stage itself.

In this cement percentage of tricalcium aluminates is kept below 5 to 6 percent and it results in the increase in resisting power against sulphate. This cement is used for structure which are likely to be damaged by sever alkaline condition such as canal linings, culverts, siphons etc.

This is a variety of ordinary cement and it is prepalkred form such raw materials which are practically free from colouring oxides of Iron, manganese or chromium. For burning of this cement, oil fuel is used instead of coal. It is used for floor finish; plaster lopol, ornamental works etc.

It may also be defined as a special type of Portland cement when used it gives a milky or snow-white appearance.

White cement are manufactured from pure limestone (chalk) and clay that are totally free from iron oxides and any other pigments like manganese and chromium. The kiln is fired by oil rather than by coal to avoid any contamination.

There strength and setting time is similar to Ordinary Portland Cement.

White cement are the most favored material for use in making highways curbs and for a variety of ornamental work. They are also used widely for making cast stones of appealing appearance.

White cement are comparatively a costly cement type and is, therefore, used only selectively.

Different Types of Cement and there uses on Construction Site