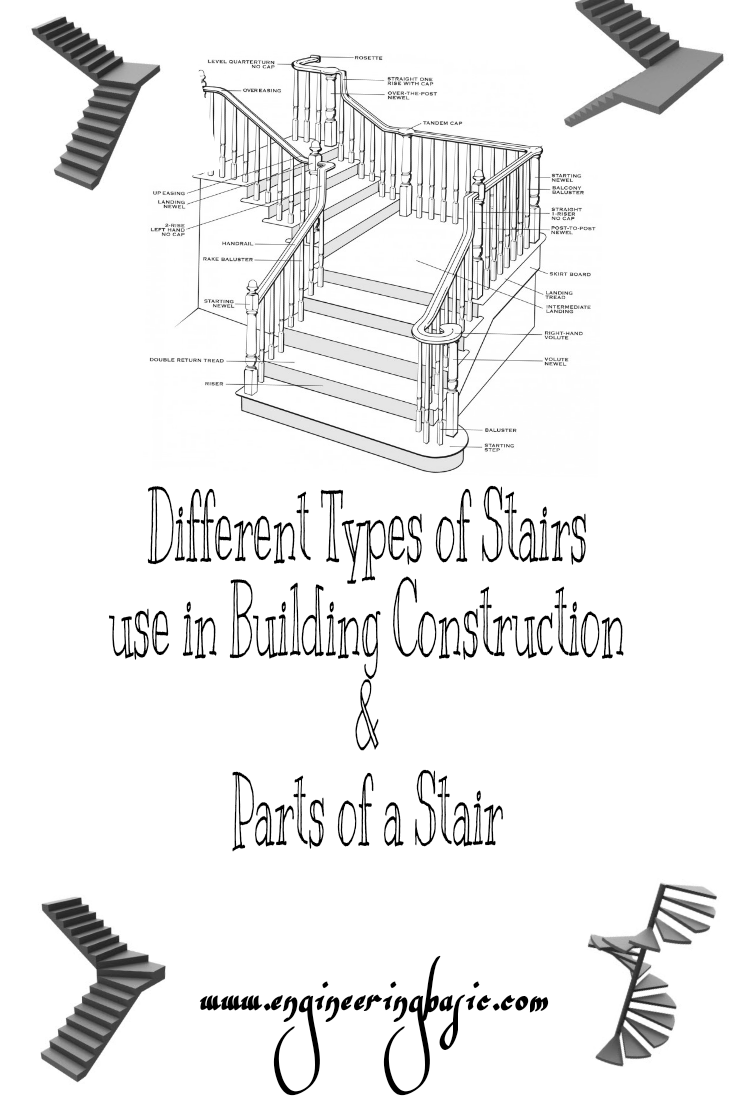 A Stair is a set of Steps designed to provide as easy and quick access to different floors inside the building. The room or enclosure of the building, in which the stair is located is known as staircase. The opening or space occupied by the stair is known as a stairway.

Depending upon the various arrangement of steps, stairs can be classified as follow

A quarter turn stair is the one which changes its direction either to the right or to the left but where the turn being affected either by introducing a quarter space landing or by providing winders. In these type of stairs the flight of stair turns 90 degrees art landing as it rises to connect two different levels. So it is also called as L-stair.

A support is typically required for the landing in a L type stair. Often this is built into the surrounding walls so it goes unnoticed. In modern dwellings however it is usually desirable to open up the space leaving the stair structure visible. In these cases the supporting structure can be visually minimized by taking advantage of the strength of steel to create slim supporting members. Through careful engineering,it is possible to eliminate the landing support all together.

Winder stairs are a variation of an Quarter Turn stairs but instead of a flat landing, they have pie shaped or triangular steps at the corner transition.

Winder stairs require less space than many other types of stairs. They are very common in older homes, often used as a secondary staircase where the grand staircase may have been in the entry and the winder used as a access to the kitchen.

They have more visual interest. Winder stairs seem to create a more seamless transition,visually, as they meander around corners. For this reason they have gained popularity in modern homes. Their compactness has also made them attractive in sustainable home designs.

Straight stairs are by far the most widespread and popular, and duly so they are convenient, functional and the most cost-effective.

In this classical design, the treads are located straight across the trajectory of the staircase. The treads are evenly spaced and the staircase may or may not have a landing, as long as it all goes in the same direction.

If you’re looking for the most practical solution, a straight staircase will never be the wrong choice. It is especially suited to minimalist homes and interiors due to its intrinsic simplicity. It is, however, significant to note these type of stairs take up much linear space and does not create a barrier between floors, which usually creates some privacy.

A stair 12 feet high requires a landing to break up the span. The addition of a landing will use up allot more space and therefore these types of stairs are seldom used in residential construction. You will see these more frequently in large commercial buildings

U shaped stairs can be easier to fit into an architectural plan because they offer some architectural interest. The landing(s) can offer a resting point part way up the stairs.

If a third flight is inserted into the middle of the stairs, it would become a double L stair (or quarter landing).

Curved stairs add elegance to home or business. For this reason they are almost always located at the entry where it makes the best first impression. Curved stairs, like spiral stairs are helical however, they tend to be on a much larger radius and typically do not make a full circle.

Curved staircase are often very elegant and traditional but this type of design can equally be adapted to contemporary designs. They are relatively easy to walk up (if the radius is large).

Curved stairs are by far the most difficult to build of the various types of stairs. In fact building curved stairs represents a pinnacle of achievement for any stair builder or fabricator. For this reason, they are the most costly to build.

The spiral stair is certainly the most interesting design. It has a helical arc, resembling the shape of a spring. All of the treads are wedge-shaped, but as opposed to the winder and arched staircases, these treads are all consistent in size. There is a central vertical post around which the treads radiate.

Spiral stairs are found mostly in city loft apartments, due to its economical use of space, ease of installation, and limitations of capacity. A spiral staircase is not really suited to frequent use, as it has a confined area which is difficult to move upon. Only one person can navigate the stairs at any one time, and it is difficult to carry large items up or down on it. This is also why many building codes do not allow the use of spiral stairs as primary ingress to a full-sized second floor.

Bifurcated stairs are commonly used in public building at their entrance hall. This has a wider flight at the bottom, which bifurcates into two narrower flights, one turning to the left and other to the right, at landing.it may be either of newel type with a newel post or of geometrical type with continuous stringer and hand rails.

Since stair is a series of steps leading from one floor to another, we would be remiss if we did not include ladders. Library ladders or loft ladders are becoming more popular to conserve space in smaller, sustainable designs.

PARTS OF A STAIR

Stairs maybe in all shapes and arrangements to suit different properties but the main parts that make up any stairs are fairly common. Below is the Diagram of a Labelled Stairs.

The part of the stairway that is stepped on. It is constructed to the same specifications (thickness) as any other flooring. The tread “depth” is measured from the outer edge of the step to the vertical “riser” between steps. The “width” is measured from one side to the other.

The vertical portion between each tread on the stair. This may be missing for an “open” stair effect.

Not all stairs have risers. The rise-less steps are known as the open tread. Open riser stairs have grown in popularity in recent years. Closed tread stair has risers included. The vertical board forms the face of the step, also forms the space between one step and the next.

The structural member that supports the treads and risers. There are typically two string, one on either side of the stairs; though the treads may be supported many other ways. The string are sometimes notched so that the risers and treads fit into them.

A term for the vertical posts that hold up the handrail. Sometimes simply called guards or spindles. Treads often require two balusters. The second baluster is closer to the riser and is taller than the first.

The angled member for handholding, as distinguished from the vertical balusters which hold it up for stairs that are open on one side; there is often a railing on both sides, sometimes only on one side or not at all, on wide staircases there is sometimes also one in the middle, or even more.

The newel is a sturdy vertical post at the end or turn of a banister. Newel is also known as central pole or support column. Since it is a structural component, it extends below the floor and subfloor to the bottom of the floor joists and is bolted right to the floor joist. There are four kinds of newel stair posts which are- standard, landing, pin-top, and stabilizer newel posts. Visually it looks like half the newel is embedded in the wall. For open landings, a newel may be extended below the landing for a decorative newel drop.