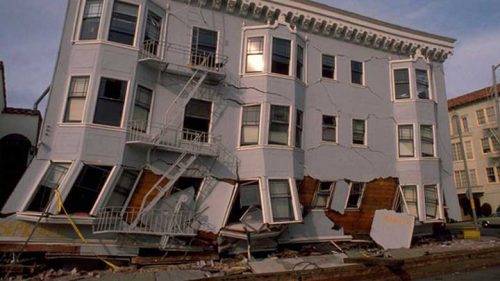 An earthquake is a sudden, rapid shaking of the earth surface caused by the breaking and shifting of rocks beneath. During an earthquake, ground motion occurs in a random fashion in all directions radiating from a point within earth crust, called epicentre. It causes vibrations of structures and induces inertia forces on them. As a result, the structure may collapse resulting in loss of property and lives. Earthquakes do not kill people, vulnerable buildings do so. Hence there is a need for designing earthquake-resistant buildings, especially in the earthquake-prone areas.

Depending upon the possible causes, the earthquakes may be classified as:

Natural earthquakes may be due to:

In earth’s crust, there are some faults which are not yet settled. The displacement of rocks along faults cause the earthquake. Tectonic means large scale process affecting the structure of the earth crust. This process causes gradual movement of material within the crust of the earth. Sometimes it shakes the earth crust. A volcano is a mountain or hill having a crater through which lava, rock fragments, hot vapour and gas are or have been erupted from the earth’s crust. Occasionally the volcanoes become active and create an earthquake near the mountain crater.

[2] EARTHQUAKE DUE TO INDUCED ACTIVITIES

These are caused by vibrations induced by atomic explosions and collapse of ground due to faulty mining.

The earthquake resistance of small buildings may be increased by taking some precautions and measures in site selections, building planning and constructions as explained below:

The building constructions should be avoided on:

CHECK OUT  Different Types of Flooring in Construction

Symmetrical plans are safer compared to unsymmetrical. Hence go for square or rectangular plans rather than L, E, H, T shaped. Rectangular plans should not have length more than twice the width.

In case of stone masonry:

In case of brick masonry:

In case of concrete blocks:

In general walls of more than 450 mm should be avoided. Length of wall should be Restricted to 6 m. Cross walls make the masonry stronger. It is better to build partition Walls along main walls interlinking the two.

Restrict chejjas or balcony projections to 0.9 m. For larger projections use beams and Columns.

Masonry parapet wall can collapse easily. It is better to build parapet with bricks up to 300 mm followed by iron railings.

The following R.C. bands should be provided:

For making R.C. bands minimum thickness is 75 mm and at least two bars of 8 mm diameters are required. They should be tied with steel limbs of 6 mm diameter at 150 mm spacing. If wall size is large, diagonal and vertical bands also may be provided.

Retrofitting means preparing a structure in a scientific manner so that all elements of a building act as an integral unit. It is generally the most economical and fastest way to achieve safety of the building. The following are some of the methods in retrofitting:

Tall buildings are subjected to heavy horizontal forces due to inertia during an earthquake. Hence they need shear walls. A shear wall is an R.C.C. enclosure within the building built to take shear forces. It is usually built around the lift room. These shear walls must be provided evenly throughout the buildings in both directions as well as from bottom to top. Apart from providing shear walls, the following techniques are also used for making tall buildings earthquake resistant:

CHECK OUT  Plane Table Surveying, Its Accessories & Working Operations of a Plane Table

If the gap between the building and the vertical wall of the foundation pit is small, the vertical wall of the pit may hit the wall. Hence 100% frictionless rollers are not provided in practice. The building is rested on flexible pads that offer resistance against lateral movements. This reduces some effect of ground shaking to the building. The flexible pads are called base-isolators, whereas the structures protected by means of these devices are called base-isolated buildings.

Another approach for controlling seismic damage in buildings is by installing seismic dampers in place of structural elements, such as diagonal braces. When seismic energy is transmitted through them, dampers absorb part of it, and thus damp the motion of the building.