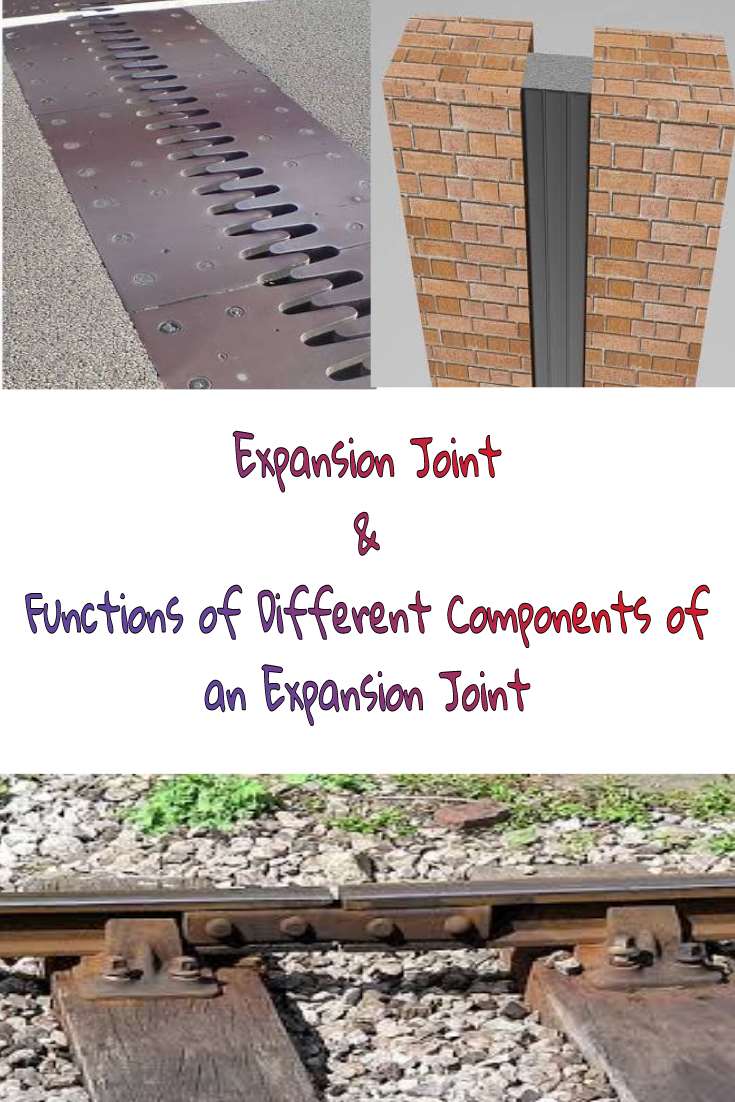 Expansion Joint is basically put in place in Construction work to give room for Expansion and Contraction of Construction Materials Due to Temperature Change.

Expansion Joint also help to absorb vibration, to hold parts together, or to allow movement due to ground settlement or Natural disasters like earthquake. They are commonly found between sections of buildings, bridges, sidewalks, Railway tracks, piping systems, ships, and other structures.

The expansion joints is mostly build in Railway tracks and Bridges. Any structure spanning more than 15m, an expansion joint must be introduce because reinforced concrete expand and contract due to change in temperature.

Concrete is not an elastic substance, and therefore it does not bend or stretch without failure. This concrete characteristic is useful and at times harmful on some occasions. Its high compressive strength and hardness make the concrete useful for applications in construction. However, concrete moves during expansion and shrinkage, due to which the structural elements shift slightly.

To prevent harmful effects due to concrete movement, several expansion joints are incorporated in concrete construction, including foundations, walls, roof expansion joints, and paving slabs. These joints need to be carefully designed, located, and installed. The flexible expansion joints are basically designed to mitigate the flexural stresses. These stresses are produced due to the vertical movements of applications adjoining rigid foundation components, like columns or foundations. If a slab is positioned contiguously on surfaces exceeding one face, an expansion joint will be necessary to reduce stresses. For example, if a slab is located between two structures, an expansion joint is essential adjoining the face of one building. Concrete sealer may be used for the filling of gaps produced by cracks.

CHECK OUT  Formwork in Construction

[1] Expansion joints permits thermal contraction and expansion without inducing stresses into the elements.

[2] An expansion joint is designed to absorb safely the expansion and contraction of several construction materials, absorb vibrations, and permit soil movements due to earthquakes or ground settlement.

[3] The expansion joints are normally located between sections of bridges, paving slabs, railway tracks, and piping systems. Weather changes during the year produce temperature variations that cause expansion and contraction in concrete paving slabs, building faces, and pipelines.

[4] The expansion joints are incorporated to endure the stresses.

[5] An expansion joint is simply a disconnection between segments of the same materials. In the concrete block construction, the expansion joints are expressed as control joints.

The site is prepared for the concrete pouring and the provisioning of the expansion joints in slabs. An individual expansion joint is created by the insertion of a flexible material that runs along the joint length. Suitable tools are used for making grooves in the poured concrete for placing of the joint materials. The depth of an expansion joint is usually one fourth of the slab thickness, or more if necessary.

The expansion joint gap depends on the type of slab, like floating slab floor, vehicle pavement, sidewalk, or monolithic slab foundation. It is also influenced by the slab dimensions, type of concrete, and the reinforcing materials being used. Cracks in concrete may occur at the expansion joints due to improper concrete mix or curing. These conditions cause shrinkage between the expansion joints and cracks can be formed.

COMPONENTS OF AN EXPANSION JOINT AND THEIR FUNCTIONS

In an expansion joint, it normally contains the following components:

The Sealer (Joint sealant) seals the joint width and prevents water and dirt from entering the joint and causing dowel bar corrosion and unexpected joint stress resulting from restrained movement.

The Filler (Joint Filler) is compressible so that the joint can expand freely without constraint. Someone may doubt that even without its presence, the joint can still expand freely. In fact, its presence is necessary because it serves the purpose of space occupation such that even if dirt and rubbish are intruded in the joint, there is no space left for their accommodation.

Dowel bar is a major component of the joint. It serves to guide the direction of movement of concrete expansion. Therefore, incorrect direction of placement of dowel bar will induce stresses in the joint during thermal expansion. On the other hand, it links the two adjacent structures by transferring loads across the joints.

The PVC dowel sleeve serves to facilitate the movement of dowel bar. On one side of the joint, the dowel bar is encased in concrete. On the other side, however, the PVC dowel sleeve is bonded directly to concrete so that movement of dowel bar can take place. One may notice that the detailing of normal expansion joints in Highways Standard Drawing is in such a way that part of PVC dowel sleeve is also extended to the other part of the joint where the dowel bar is directly adhered to concrete. In this case, it appears that this arrangement prevents the movement of joint. If this is the case, why should designers purposely put up such arrangement? In fact, the rationale behind this is to avoid water from getting into contact with dowel bar in case the joint sealant fails. As PVC is a flexible material, it only minutely hinders the movement of joint only under this design.

CHECK OUT  Measurement of Distance with Chains or Tapes

As the majority of joint sealant is applied in liquid form during construction, the bond breaker tape helps to prevent flowing of sealant liquid inside the joint.

The Cradle Bar helps to uphold the dowel bar in position during construction.