Foundation & Footing Types and their Area of Application in Construction 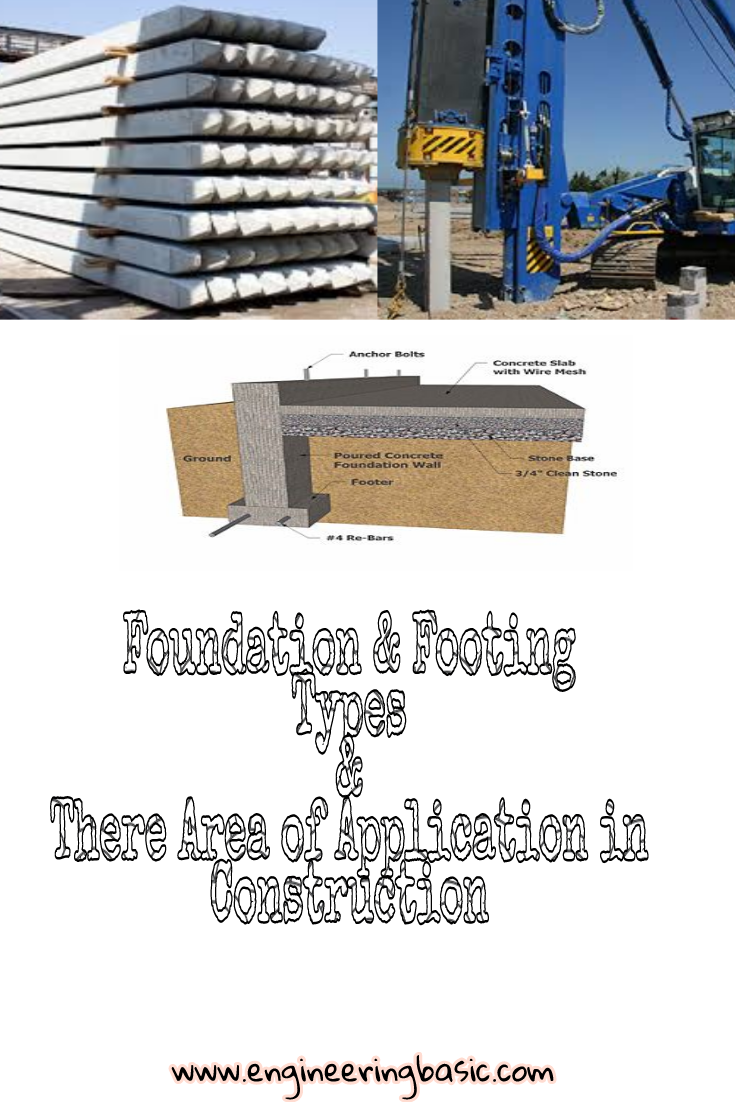 The Green portion in the diagram below is the Foundation.

The term Footing is used in conjunction with shallow foundation commonly.

Footing is the part of foundation or a foundation unit in brick work masonry or concrete under the base of walls or columns for the purpose of distributing the load over a large area. A Footing or a shallow foundation is place immediately below the lower part of super structure which transfers the load directly to the soil.

Foundations are broadly classified as :

Most small and medium homes are built upon a shallow foundation. These are usually comprised of concrete strips that are laid about 3.3 feet (1 meter) beneath the soil, or of a single large concrete slab that is also set about 3.3 feet (1 meter) beneath the soil. The considerations for a shallow foundation, engineers must consider weight and settlement, as well as scour  water eroding soil beneath the structure. Can be classified as spread footings, wall and continuous (strip) footings, and mat (raft) foundations.

This types of Foundation mostly built for lightweight buildings where the condition of the soil is extremely good with uniform layer and low water table.

The shallow foundation can also be classified into 2

This is the most common type of foundation widely used for buildings. In this foundation, each column has its own footing. These foundations are connected with plinth beam just below the ground level. It comes in various shapes such as rectangular, circular and continuous according to the load distribution.

Isolated Footings are also classified into the following Types

This is where isolated columns (pillars) are casted from the foundation to carry a slab at the top of the ground. This is mostly used when you want to make use of the under of building as parking space or when the other space is not conducive to have foundation. This columns are thus isolated and their foundations are referred to as pad.

Sometimes two or more footing may be combined because the adjacent footing might be closer where shuttering is not possible at all for the given procedure.

Combined footing can support more than one column and useful when its two columns are so close that single footings cannot be used or is located at or near a property line. Combined footing is usually support two or three columns not in a row. Combined footings are used where the bearing areas of closely spaced columns overlap.

Sloped footings are trapezoidal footings. They are  done with great care to see that the top slope of 45 degree  is maintained from all sides.  When compared the trapezoidal footing with the flat footing the usage of concrete is less. Thus, it reduces the cost of footing in concrete as well as reinforcement.

Shoe footing is the half footing cut-out from the original footing and it has a shape of shoe. It is provided in the corner of the plot . Where there is no provision of setback area. They are constructed on property boundary. Column is provided or loaded at the edges of footing. It is provided when the exterior column is close to the boundary or property line and hence there is no scope to project footing much beyond the column face. Shoe footings are constructed when the soil bearing capacity is the normal  24KN/m2

When the column loads are heavy or the safe bearing capacity of soil is very low,  The required footing area become very large. As mentioned this footing is in shallow foundation. So in order to spread the load over large area with less depth then we have to increase the footing area. If we increase footing area, the footings overlapped each other instead of providing each footing on each column all columns are placed in common footing.  A raft or mat footing  is a solid reinforced concrete slab covering entire area beneath the structure and supporting all the columns. Such foundation due to its own rigidity minimizes differential settlements.

It is provided in a places like seashore area, coastal area area where the water table is very high and soil bearing capacity is very weak.

When number of column in more than one row, provided with a combined footing, the footing is called mat or raft footings.

You mostly see these type of foundation for High Residential Building construction where it has a basement.

This type of foundation will be constructed under two situations,

CHECK OUT  Different Grades of Concrete and their Area of Application

Larger buildings use a deep rather than a shallow foundation. A deep foundation uses long pylons of steel or concrete to penetrate beyond the weaker surface soils into the deeper and more stable soils or bedrock beneath. The load from the walls above is transferred deep into the earth, thereby providing support for the intense weight above.

Deep Foundations are also classified into the following Types

A pile is a long vertical load transferring member composed of either timber, steel or concrete. In pile foundations, a number of piles are driven  in the base of the structure.

They are constructed where excessive settlement is to be eliminated and where the load is to be transferred through soft soil stratum, where the Soil bearing capacity is sufficient.These types of footings are provided when the Soil bearing capacity of soil is very weak and the Ground water table (level) is high. These types of the  footings are generally designed on sea shore areas, bridges to construct piller, etc.

The main objective of providing piles under the footing is to prevent structure from settlement. If we don’t provide pile under the footing, then the building will have settlement. Piles are hammered in to the ground till hard strata (in compressible) layer of earth is found.
Basically they are divided into two types they are

The piles which are casted already and transported to the site. These kind of piles are used where there is less place to cast pile. These are readymade piles and requires more money to transport piles to the site.

the piles which are casted on site. And don’t require any transportation is called cast in situ piles. The cast-In-situ concrgte piles are casted in position inside the ground and need not to be  reinforced in ordinary cases. These piles are not subjected to handling or driving stresses. The cast- in-situ concrete piles are generally used for a maximum design load of 750 kN.

Piles are more classified into different types. Basically there are classified as above. In depth article about pile foundation would be updated soon. Stay tuned to our website. Not only this i ll update current openings  for every 3 days. Only for civil engineers. You can find them In Job category of website.

CHECK OUT  Different Types of Wall in a Structure

Pier, in building construction, vertical load bearing member such as an intermediate support for adjacent ends of two bridge spans. In foundations for large buildings, piers are usually cylindrical concrete shafts, cast in prepared holes, while in bridges they take the form of caissons, which are sunk into position. Piers serve the same purpose as piles but are not installed by hammers and, if based on a stable substrate, will support a greater load than a pile. Especially adapted to large construction jobs, pier shafts having widths of more than 1.8 m (6 feet) have been excavated to depths greater .

Caisson or pier foundations are often used in large construction under water bodies such as river, sea.

These type of foundations are used in bridges and large structures (metro train projects) where a long cylindrical casing will be inserted and then poured with concrete along with reinforcement. Once the concrete hardens the shape will be removed from the hole.

Procedure for Making this Foundation are stated Below:

The bearing capacity of soil is the maximum average contact pressure between the foundation and the soil which should not produce shear failure in the soil.

Sometimes, on soft soil sites, large settlements may occur under loaded foundations without actual shear failure occurring; in such cases, the allowable bearing capacity is based on the maximum allowable settlement.

The occupant load describes the number of square feet allocated to each person within a building.

Settlement of a foundation that is caused by seasonal factors is especially noticeable during the hot dry summer months.  Below ground level, depending upon climate and environmental conditions. The drying of the soils occur because of both evaporation and transpiration (water being removed because of trees and shrubs). As the soils dry, they tend to consolidate; as they consolidate, many times, a slab-on-grade foundation settles.

Foundation & Footing Types and there Area of Application in Construction