The Uses, Principles, Classifications, and Types of Surveying 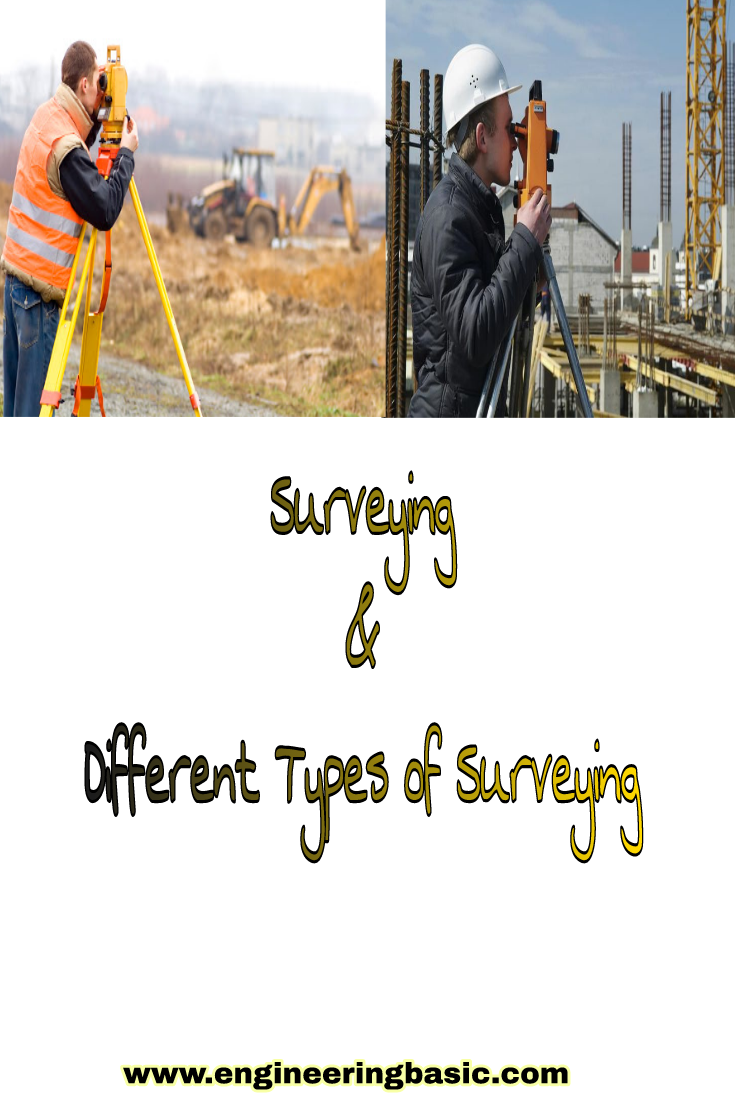 Surveying is the art of determining the relative positions of different objects on the surface of the earth by measuring the horizontal distances between them, and by preparing a map to any suitable scale. Thus, in discipline, the measurements are taken only in the horizontal plane.

The aim of surveying is to prepare a map to show the relative positions of the objects on the surface of the earth. The map is drawn to some suitable scale. It shows the natural features of a country, such as towns, villages, roads, railways, rivers, etc. Maps also include details of different engineering works, such as roads, railways, irrigation canals, etc.

Surveying may be used for the following various applications:

The general principles of surveying are:

According to the first principle, the whole area is first enclosed by main stations (i.e. Controlling stations) and main survey lines (i.e. controlling lines). The area is then divided into a number of parts by forming well conditioned triangles. A nearly equilateral triangle is considered to be the best well-conditioned triangle.The main survey lines are measured very accurately with a standard chain. Then the sides of the triangles are measured. The purpose of this process of working is to prevent accumulation of error. During the procedure, if there is any error in the measurement of any side of a triangle, then it will not affect the whole work. The error can always be detected and eliminated.

Surveying is primarily classified as under:

Is that type of surveying in which the mean surface of the earth is considered as a plane and the spheroidal shape is neglected. All triangles formed by survey lines are considered plane triangles. The level line is considered straight and all plumb lines are considered parallel. In everyday life were are concerned with small portion of earth’s surface and the above assumptions seems to be reasonable in light of the fact that the length of an arc 12 kilometers long lying in the earth’s surface is only 1cm greater than the subtended chord and further that the difference between the sum of the angles in a plane triangle and the sum of those in a spherical triangle is only one second for a triangle at the earth’s surface having an area of 195 sq. km.

Is that type of surveying in which the shape of the earth is taken into account. All lines lying in the surface are curved lines and the triangles are spherical triangles. It therefore, involves spherical trigonometry. All Geodetic surveys include work of larger magnitude and high degree of precision. The object of geodetic survey is to determine the precise position on the surface of the earth, of a system of widely distant points which form control stations to which surveys of less precision may be referred.

Surveys may be secondarily classified under no. of headings which define the uses or purpose of resulting maps.

Classification based upon nature of field:

There are three types of surveying based upon the nature of field which are as follows:

Marine or hydrographic survey deals with bodies of water for purpose of navigation, water supply, harbour works or for determination of mean sea level. The work consists in measurement of discharge of streams, making topographic survey of shores and banks, taking and locating soundings to determine the depth of water and observing the fluctutations of the ocean tide.

Classification based on object:

Based on object, there are four types of surveying which are as follows:

Classification based on instruments used:

Based on various types of instruments used, surveying can be classified into six types.

Surveying and Different Types of Surveying