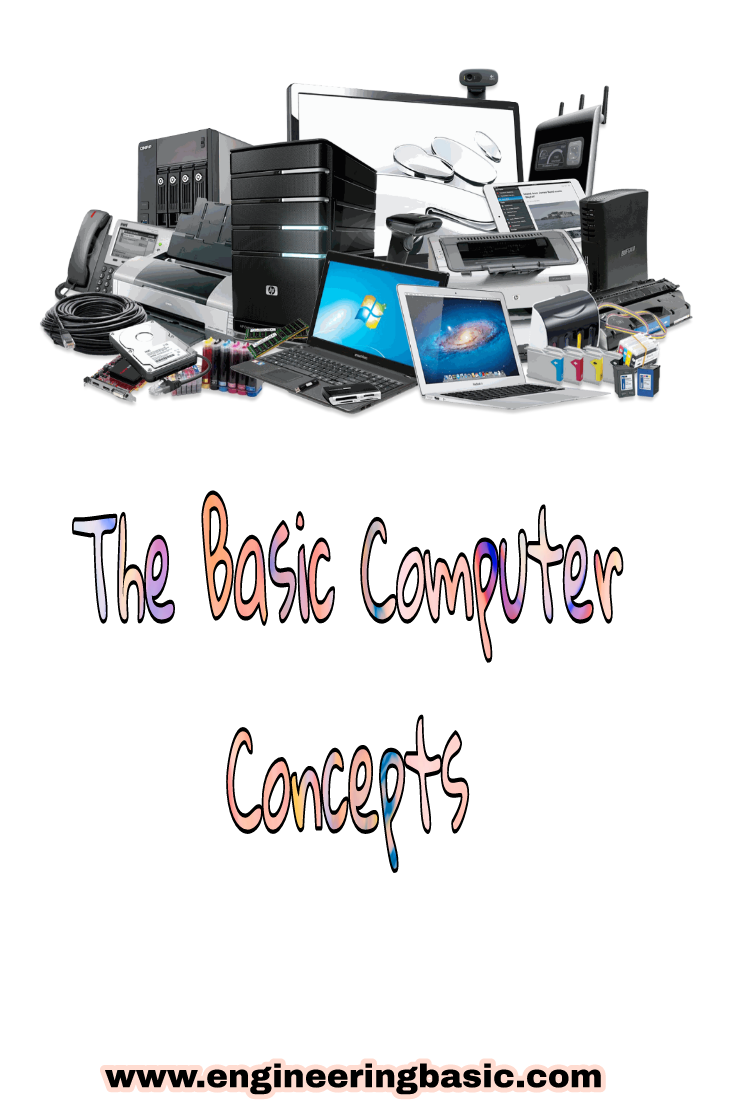 A computer is a programmable machine designed to perform arithmetic and logical operations automatically and sequentially on the input given by the user and gives the desired output after processing.

A computer is also an electronic device that stores, retrieves, and processes data, and can be programmed with instructions.

Hardware is the machine itself and its connected devices such as monitor, keyboard, mouse etc. Hardware is also refers to the physical components of the computer.

Software are the set of programs that make use of hardware for performing various functions. The software is the instructions that makes the computer work. Software is held either on your computers hard disk, CD-ROM, DVD or on a diskette (floppy disk) and is loaded (i.e. copied) from the disk into the computers RAM (Random Access Memory), as and when required.

The characteristics of computers that have made them so powerful and universally useful are speed, accuracy, diligence, versatility and storage capacity. Let us discuss them briefly

Computers work at an incredible speed. A powerful computer is capable of performing about 3-4 million simple instructions per second.

In addition to being fast, computers are also accurate. Errors that may occur can almost always be attributed to human error (inaccurate data, poorly designed system or faulty instructions/programs written by the programmer).

Unlike human beings, computers are highly consistent. They do not suffer from human traits of boredom and tiredness resulting in lack of concentration. Computers, therefore, are better than human beings in performing voluminous and repetitive jobs.

Computers are versatile machines and are capable of performing any task as long as it can be broken down into a series of logical steps. The presence of computers can be seen in almost every sphere – Railway/Air reservation, Banks, Hotels, Weather forecasting and many more.

Today’s computers can store large volumes of data. A piece of information once recorded (or stored) in the computer, can never be forgotten and can be retrieved almost instantaneously.

A computer performs five major operations or functions irrespective of its size and make. These are

Computer’s memory can be classified into two types; primary memory and secondary memory;

Primary Memory can be further classified as RAM and ROM.

RAM is volatile memory having a limited storage capacity. Secondary/auxiliary memory is storage other than the RAM. These include devices that are peripheral and are connected and controlled by the computer to enable permanent storage of programs and data.
Secondary storage devices are of two types; magnetic and optical. Magnetic devices include hard disks and optical storage devices are CDs, DVDs, Pen drive, Zip drive etc.

An input device is any device that provides input to a computer. There are many input devices, but the two most common ones are a keyboard and mouse. Every key you press on the keyboard and every movement or click you make with the mouse sends a specific input signal to the computer.

The keyboard is very much like a standard typewriter keyboard with a few additional keys. The basic QWERTY layout of characters is maintained to make it easy to use the system. The additional keys are included to perform certain special functions. These are known as function keys that vary in number from keyboard to keyboard.

A device that controls the movement of the cursor or pointer on a display screen. A mouse is a small object you can roll along a hard and flat surface. Its name is derived from its shape, which looks a bit like a mouse. As you move the mouse, the pointer on the display screen moves in the same direction.

A trackball is an input device used to enter motion data into computers or other electronic devices. It serves the same purpose as a mouse, but is designed with a moveable ball on the top, which can be rolled in any direction.

A touch pad is a device for pointing (controlling input positioning) on a computer display screen. It is an alternative to the mouse. Originally incorporated in laptop , touch pads are also being made for use with desktop computers. A touch pad works by sensing the user’s finger movement and downward pressure.

It allows the user to operate/make selections by simply touching the display screen. A display screen that is sensitive to the touch of a finger or stylus. Widely used on ATM machines, retail point-of-sale terminals, car navigation systems, medical monitors and industrial control panels.

Light pen is an input device that utilizes a light-sensitive detector to select objects on a display
screen.

MICR can identify character printed with a special ink that contains particles of magnetic material. This device particularly finds applications in banking industry.

Optical mark recognition, also called mark sense reader is a technology where an OMR device senses the presence or absence of a mark, such as pencil mark. OMR is widely used in tests such as aptitude test.

Scanner is an input device that can read text or illustration printed on paper and translates the information into a form that the computer can use. A scanner works by digitizing an image.

Output device receives information from the CPU and presents it to the user in the desired from. The processed , stored in the memory of the computer is sent to the output unit, which then converts it into a form that can be understood by the user. The output is usually produced in one of the two ways – on the display device, or on paper (hard copy).

Monitor is often used synonymously with “computer screen” or “display.” Monitor is an output device that resembles the television screen (fig. 1.8). It may use a Cathode Ray Tube (CRT) to display information. The monitor is associated with a keyboard for manual input of characters and displays the information as it is keyed in. It also displays the program or application output. Like the television, monitors are also available in different sizes.

Printers are used to produce paper (commonly known as hardcopy) output. Based on the technology used, they can be classified as Impact or Non-impact printers.

Facsimile machine, a device that can send or receive pictures and text over a telephone line. Fax machines work by digitizing an image.

An expansion board that enables a computer to manipulate and output sounds. Sound cards are necessary for nearly all CD-ROMs and have become commonplace on modern personal computers. Sound cards enable the computer to output sound through speakers connected to the board, to record sound input from a microphone connected to the computer, and manipulate sound stored on a disk.

Computer software is the set of programs that makes the hardware perform a set of tasks in particular order. Hardware and software are complimentary to each other. Both have to work together to produce meaningful results. Computer software is classified into two broad categories; system software and application software.

System software consists of a group of programs that control the operations of a computer equipment including functions like managing memory, managing peripherals, loading, storing, and is an interface between the application programs and the computer. MS DOS (Microsoft’s Disk Operating System), UNIX are examples of system software.

Types of application software are:

Machine language or machine code is the native language directly understood by the computer’s central processing unit or CPU. This type of computer language is not easy to understand, as it only uses a binary system, an element of notations containing only a series of numbers consisting of one and zero, to produce commands.

Assembly Level Language is a set of codes that can run directly on the computer’s processor. This type of language is most appropriate in writing operating systems and maintaining desktop applications. With the assembly level language, it is easier for a programmer to define commands. It is easier to understand and use as compared to machine language.

High Level Languages are user-friendly languages which are similar to English with vocabulary of words and symbols. These are easier to learn and require less time to write.
They are problem oriented rather than ‘machine’ based.
Program written in a high-level language can be translated into many machine languages and therefore can run on any computer for which there exists an appropriate translator.

An interpreter translates high-level instructions into an intermediate form, which it then executes. Compiled programs generally run faster than interpreted programs. The advantage of an interpreter, however, is that it does not need to go through the compilation stage during which machine instructions are generated. This process can be time-consuming if the program is long.