Troubleshooting of Some Home Electrical Problems 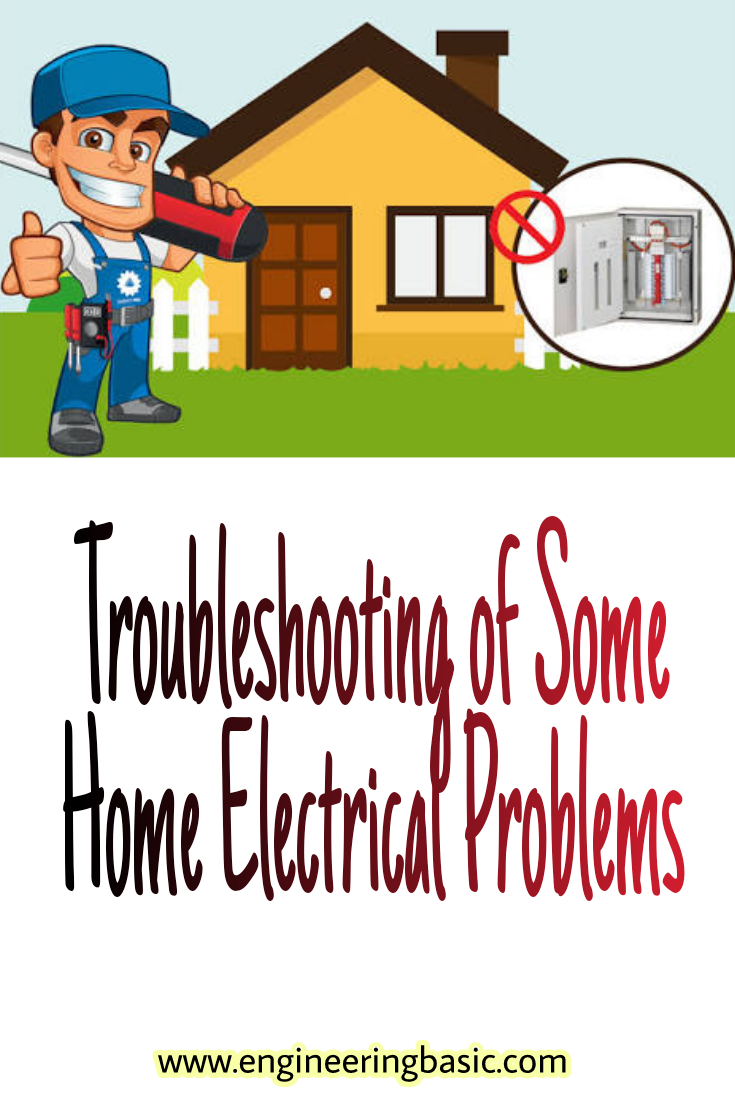 I previously wrote about Common Electrical Mistakes and The proper way to go about it, those are the electrical problem caused by the electrician.

Before you think of troubleshooting any Electrical Problem yourself, make sure you know Some Safety Precautions That Must be Put in Place While Working with Electricity and Electrical Equipments.

ELECTRICAL PROBLEMS AND STEPS IN TROUBLESHOOTING THEM

When you Experienced a power failure at home, the first thing to do is determine whether the problem lies in your house’s system or is a utility company outage. If the whole house is out and it looks like your neighbors have lost power too, call the utility company. If any of your home’s electrical power works—receptacles or lights in another room, for example, the problem is with your system.

CHECK OUT  Some Unethical Behavior of an Engineer

Overlamping happens when a high wattage bulb is used in a low wattage light fixture. Not only is this is a code violation, but it’s also a very dangerous situation. The heat from the bulb can melt the wires in the fixture, which could lead to an arc and fire.

Overlamping occurs in houses with outdated electrical systems. In homes that were built 50 years ago or more, the electrical circuitry will typically lack the capacity for today’s light voltages and appliances. When an outlet is sourced beyond its level of power, the overlamping can put a strain on your electrical system.

Overlamping becomes dangerous when it causes the wires behind an over-sourced outlet to overheat. Once overheated, the wires can eat away at the surrounding insulation. With no insulation barrier, the overheated wires could ignite anything they touch, which could lead to a fire.

In houses with outdated electrical capacities, overlamping can be prevented with the

When a light fixture is overlamped, the socket can also be a source of danger. An overdrawn lamp is bound to overheat at the socket and through the underlying wires. The overheating can cause arcing, where eclectic sparks are sent through the air between wires. Arcing is a leading cause of fires.

There are few things more annoying than replacing light bulb faster than you bought them. Fortunately, getting to the bottom of why your lights are not lasting as long as they should is a fairly straightforward process. For starters,

Electrical shocks are mild yet annoying occurrences that sometimes happen at the flick of certain light switches and appliances. The problem could stem from either the power source or the device itself. If the problem occurs with only one particular device, that’s likely the culprit. If a certain outlet is generating shocks through various devices that it powers, the issue is probably down to the power source. In the latter case, you should definitely have the matter checked by a professional electrician.

If an appliance overdraws an outlet with a circuit breaker, the breaker might trip and cut the power supply. When this happens, it means that the circuit breaker is warning you against overloading the outlet.

Two appliances known to trip circuit breakers are hairdryers and microwaves. In your bathroom, the reset button might snap out if you run a hairdryer on a hot, high setting for too long at a time. Likewise, a microwave could trip a circuit breaker after several minutes, especially if the outlet is overdrawn with a daisy-chained power board.

To stop your circuit breaker from tripping in the future,

CHECK OUT  Common Faults in Transformer and its Protections

The average home is full of more electrical appliances than ever. Consequently, homes that were built before the advent of home computers, big screen TVs and massive entertainment systems are often ill-equipped to power all these electronics simultaneously. If your living quarters are limited to one or two outlets per room, chances are you have been forced to split your outlets with extension strips.

In today’s buildings, receptacles are supposed to be in place every 12 feet from one another. Furthermore, each room is supposed to have an outlet within four feet of the entryway.